Kabul: The U.S. Embassy urged all US citizens to leave Afghanistan immediately using available commercial flight options. Given the security conditions and reduced staffing, the Embassy’s ability to assist U.S. citizens in Afghanistan is extremely limited even within Kabu, a statement read. The U.S. Embassy can provide a repatriation loan for U.S. citizens who cannot afford at this time to purchase a commercial ticket

Kabul: Recent actions by the Taliban will not help them gain international legitimacy, the White House said on Friday, after insurgents from the group killed the government's senior media officer in Kabul. "Our view is that, if the Taliban claim to want international legitimacy, these actions are not going to get them the legitimacy they seek," White House press secretary Jen Psaki said at

Kabul: Foreign Minister Mohammad Hanif Atmar has called for an end to attacks, documentation of crimes and monitoring of Taliban human rights violations in Afghanistan. Atmar raised the issue in an online meeting with UN High Commissioner for Human Rights Michelle Bachelet on Friday. The foreign minister spoke at the online meeting about the unprecedented increase in Taliban attacks that have killed civilians and

Kabul: Security officials in Badakhshan province said that Taliban attack on the provincial capital, Faizabad, has been repulsed. Badakhshan police spokesman Sanaullah Rouhani told Subhe Kabul daily that Taliban fighters attacked the city of Faizabad from several directions on Friday night. According to him, as a result of the resistance of the defense and security forces, the attack was repulsed and the Taliban fighters

Kabul: Head of Iran-Afghanistan Joint Chamber of Commerce has said exports from Iran to Afghanistan have declined more than 85 percent due to the increasing tensions in the country, the portal of Iran Chamber of Commerce, Industries, Mines and Agriculture (ICCIMA) reported on Friday. "With the escalation of the conflict in Afghanistan, the number of trucks carrying Iranian goods to this country has

Kabul: India's Permanent Representative to the United Nations, TS Tirumurti, on Friday said that there should be zero tolerance for terrorism in all its forms and manifestations for enduring peace in Afghanistan and terrorist safe havens in the region must be dismantled. Addressing United Nations Security Council (UNSC) briefing on Afghanistan, Tirumurti said, "It needs to be ensured that Afghanistan's neighbours and the region

7 August 2021
50 Media Outlets Shut Down Due To Taliban Threats: Wafayezada

Kabul: Mohammad Qasem Wafayezada, Acting Minister of Information and Culture, said that about 50 video and audio media outlets in the country had been shut down by the Taliban due to the escalation of violence. Speaking at a meeting in Kabul on Thursday, the Acting Minister said that Taliban fighters had seized six radio stations and forced them to broadcast their "songs." "The Taliban

The Ministry of Public Health (MoPH) on Thursday reported that 3351 cases were tested and 445 of them were positive cases of coronavirus in the last 24 hours. The ministry also reported 15 deaths. 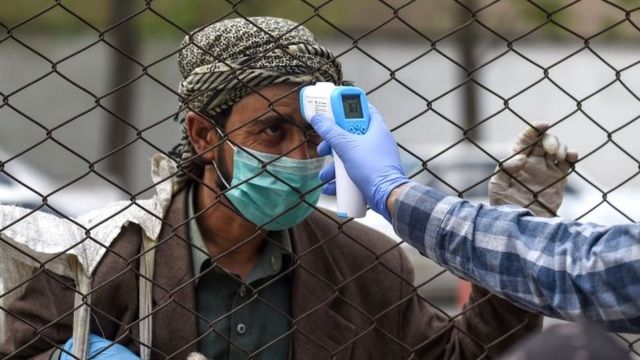 Kabul: Local sources in Balkh province said that one person was killed and ten others, including a soldier, were injured in an explosion near the Grand Blue mosque. Adel Shah Adel, a spokesman for the Balkh police, told Hashte Subh Daily that an explosion took place at noon on Thursday, on the Nazargah public road. According to Adel, the explosion was caused by a

Kabul: Ajmal Omar Shinwari, a spokesperson for the armed forces, said on Thursday that the casualties inflicted on enemy personnel over the past three days are unprecedented in the last 20 years. He added that in the last 24 hours alone, 200 insurgents have been killed in operations in Helmand province. The spokesman said that the country's defense and security forces had carried out