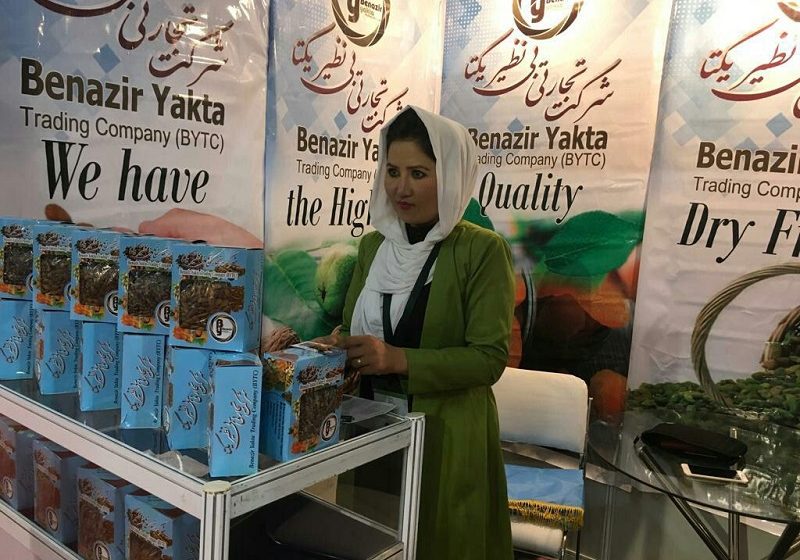 Benazir Yakta: The Businesswoman & Trader Who has Women Empowerment and Economic Development of Afghanistan on her Mind

“When I took the decision, no one agreed in the beginning. My family, my mother, and my brothers were not happy with the launch of the export of dried fruit & nuts merchandise, but I was determined to set it up and I was prepared to endure all the hardships. The decision made me sell my bracelets and start this business. It did not seem easy, but it was not possible to start either. My family members always said that working conditions in Afghanistan were not suitable particularly for women, and the security situation was also not suitable for a woman’s business.

But I was kind of a girl who never abide by those words. Although I could understand my family’s concerns, I also thought that it was necessary to start from somewhere, to both bring progress to the country, and to strengthen women’s role in business in Afghanistan, and along with this, we have to try to contribute to the security as well. ”

Benazir Yakta, a woman who began exporting dried fruits & nuts and started the business by selling her bracelets, told Reporterly: “Although I could have migrated to UK, I did not and felt that I should thrive in Afghanistan and contribute to the development of Afghanistan too.”

She believes that if she went to UK, she would have had to start from zero, but in Afghanistan she could reach a good position and status in a short time.

Making Use of the Air corridor

Benazir is the first woman to use the air corridor to export Afghan goods. She started exporting dried fruits & nuts from early 2017 through land transports, and now uses the air corridor. 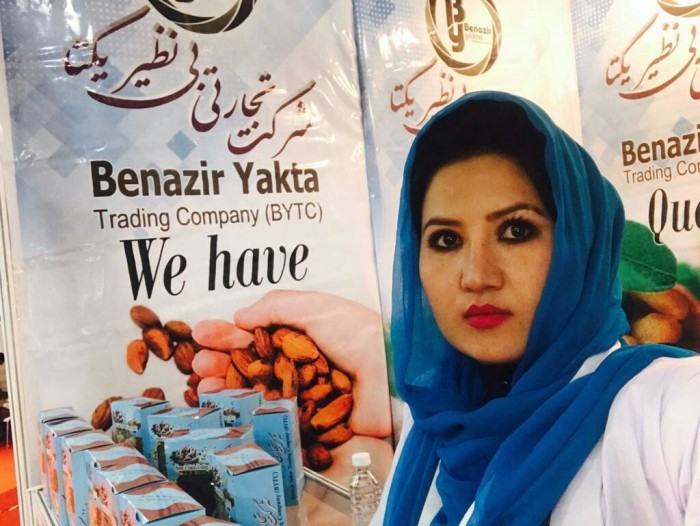 “The air corridor has had a very strong impact on my exports and overall business, because it has a lower rate, and the goods and commodities arrive at a given time,” said Benazir, “Previously, there was a high risk in land transport, the fruits were likely to go bad or even fail to reach the other side of the contract. But it’s a lot better now and there’s a good chance to grow in the market. ”

After the processing of fruits at her factory in Kabul, Benazir exports them to India, UAE and the United Kingdom.

In her Company, 80 women work indirectly across provinces and in Kabul. There are 5 men in Kabul who process and package the products. The exported merchandise from Afghanistan are collected from Kandahar, Daikundi, Ghazni and Logar provinces.

“In order to carry fruits from provinces to Kabul, we have contracts with farmers to send them to us, and after having arrived in Kabul, they are processed and packaged, and sent to certain countries with which we have contract. “, Benazir told to Reporterly.

“The women who work with us do this from their homes, so we send them fruits and nuts like almonds, walnuts or raisins. They shell and clean them, and get paid in return,” explained Ms. Yakta.

“Some fruits that should be dried, like apricots, are dried and packaged by machines,” she added.

At Benazir’s Company, women are paid according to the amount of work they do, for example if they shell almonds, they would be paid for every 7 Kgs and do not receive a fixed monthly salary. 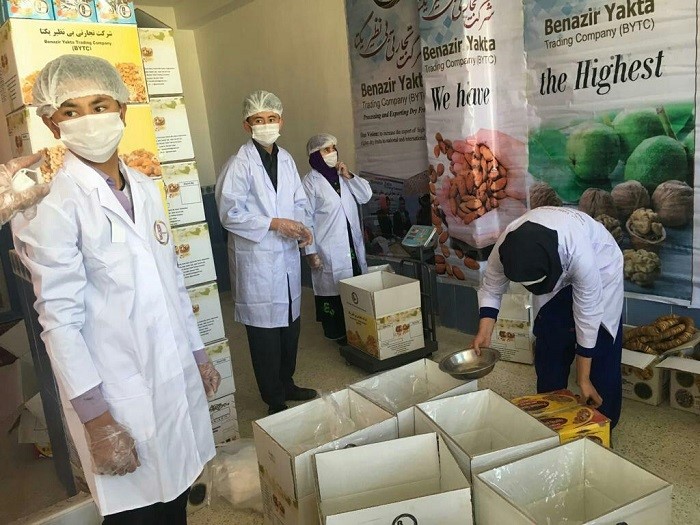 In her Company, 80 women work indirectly in provinces and Kabul, as well as 5 men in Kabul to process and package the products

Motivation and income of work in the export sector

“It’s not too difficult, because we are witnessing that women can do anything in Afghanistan now,” she said about the motivation behind starting up her business, “It’s like collecting fruits from gardens and selling them to Afghan markets by drying it in a traditional way. It’s just the same thing; with a difference that the products first undergo a standard process, and are then sent abroad, creating job opportunities for women and empowering them economically. ”

“I have also come to invest in this sector so that I could contribute in my capacity to an industry which predominantly comes from agriculture,” she added.

“But the revenue we have in this sector is different, because when we have a contract, we would get a better revenue, but if we do not have a contract, there will certainly not be much revenue. Our total revenue is contractual and is not considered monthly. ”

Challenges and changing the situation in Afghanistan

Afghanistan is an importing country, a country that only consumes, but if anyone comes and wants to create or invest in a business, he or she will have good opportunities.

“This importing and consuming country needs people to come and invest in, which will lead Afghanistan to be among those countries in which production is taking place, because the capacity to work is available, and the government also supports investors and businesspersons in the country” believes Benazir.

She also speaks of the challenges facing Afghanistan: “If we want to recall the challenges and problems, lack of security is one of the common problems that everyone is suffering from. The insecurity of the country has caused the people to be afraid to step up and do what they want to do. ”

“It’s a much bigger problem for businesswomen.For example, for a woman who cannot travel when she wants to go to a province,” Benazir said, “I also encounter this insecurity. When I had to travel to one of the provinces for a contract, because of the insecurity of the route, I could not go to see the fruits personally. When the sample apricot was given to us, that was excellent in quality and made us sign the contract with the other party, but when the apricots reached us and had be shipped out after the process, I realised that worst quality of apricot was sent to us; that’s why, if we could go to the provinces ourselves and be present at the time of gathering fruit, such situations can be avoided. As a result, I suffered a loss in the deal. ”

As the second challenge, she complains about the lack of regular electricity in Kabul, saying: “Due to the fact that electricity is imported, most of the time, especially in the cold season of winter, we do not have electricity on a regular basis, which slows down the process. The power cuts and outages also cause the expenses to rise. Lack of electricity in factories that use machines to process their work is a big problem, and these are the points that make us unable to compete in the market and even stay behind. ”

She adds that Afghanistan has the potential for solar energy and we can use its potential; using these facilities with accurate planning can help the country’s progress and economic development.

Benazir  spoke about the ways to address these current challenges: “In industry and agriculture, prices and costs need to be lowered so that everyone can enter the market and take the lead in investing.”

Where does Benazir start from?

Benazir, 25, received a Bachelor’s degree from the University of Kabul in political science.

She had to sell 4 of her bracelets for AFN 50,000. With 25,000 Afghanis, she could get a business license for her company and with 25,000 remaining, she started to set up her business. After she took the first steps, her mother and siblings have been the main supporters in this way. 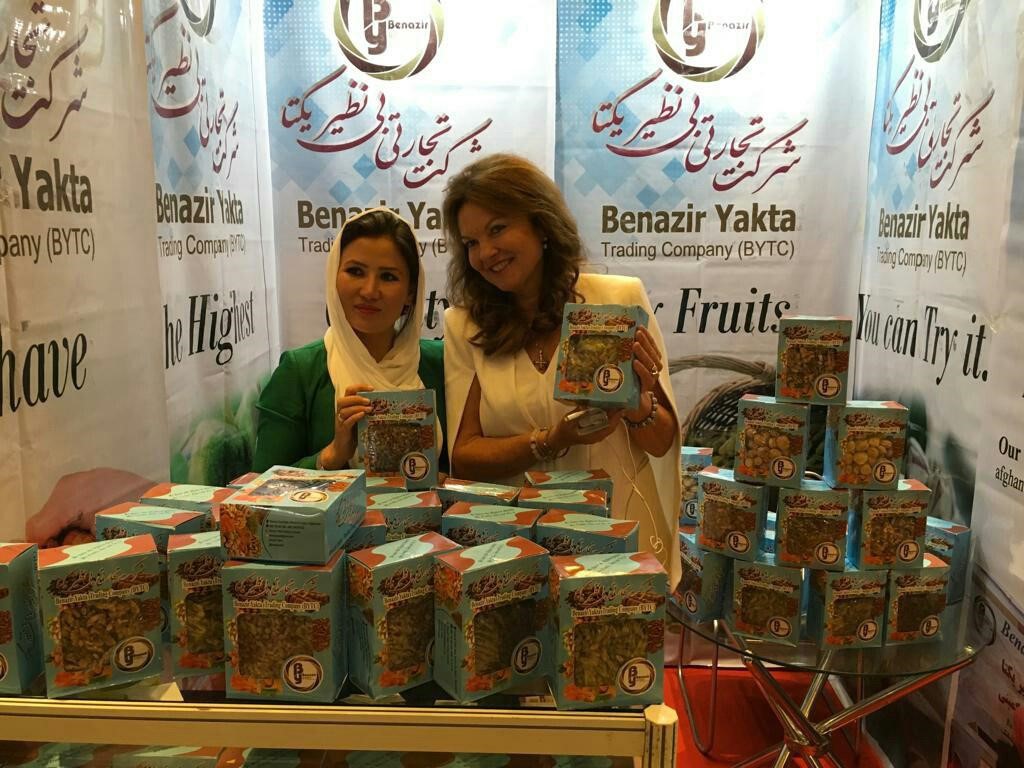 Benazir,25, received a Bachelor’s degree from the University of Kabul in political science

“For my first export, I went to the Afghanistan Chamber of Commerce & Industries, there was no problem at all and they welcomed me and said that you are the first woman to export Afghan goods overseas, and they encouraged me to do more work,” she said.

“As a businesswoman, I believe I can grow this business, and I can expand my export business to reach more markets overseas.” Benazir said as the chat with Reporterly concluded.

“We must all believe in ourselves, and if you are looking for work, Afghanistan has embraced the best opportunities,” she continued to address the Afghan women.